UltimateDefrag Tips For Users Of PrimoCache

UltimateDefrag is hard drive defragmentation software that identifies and optimizes placement of most frequently used files to the fastest performance areas of a traditional hard drive's platters – the outer tracks.

These two independently developed utilities perfectly compliment each other in more ways than one and together, work synergistically to give PC users the truly objective ultimate solution to getting the fastest performance possible from traditional hard drives while enjoying their massive storage capacity.

How Does PrimoCache Work?

If you have an SSD installed on the same system as a regular hard drive, you can partition and allocate some of the space on your SSD as a cache for your regular hard drive. You can even dedicate a complete SSD drive to PrimoCache. Any data that gets read from your hard drive, is cached onto the space allocated on the SSD so that when the data is read again, it is not read from the regular hard drive. Instead, the read request is intercepted and is read from the SSD – at SSD speeds! This is known in PrimoCache, and in caching terminology, as L2 caching. You can even use a USB flash drive as your L2 cache although better performance is achieved with an SSD.

Even faster performance is realized when you allocate some of your regular RAM to what is known as L1 cache. That same data is actually stored in RAM in the same block structure as a hard drive stores data. So a request for that data is intercepted and read from memory at speeds which in their own right can be 100 to 1000 times faster than the typical latency of even an SSD. L1 caching is, in a way, similar to regular caching that the O/S uses memory for but L1 block based caching emulates reading from a drive, but instead reads from RAM, and it does a much better job than the default operating system's caching. This speed is why RAM drives are often used. With block based L1 cache, you experience a distinct increase in performance from data accessed from regular O/S memory cached data. With that in mind, if you have 64 Gb or 32 Gb memory on your PC, we recommend that you allocate up to 75% of that as L1 cache so that it takes over most of the RAM that Windows would otherwise use for caching and also does a better job of the caching process than Windows does.

Another job of caching is to defer writing of data to the physical hard drive. This improves system performance too because it improves write performance and reduces simultaneous reads and writes on a hard drive, especially in an idle flush routine when the writing is not done until the hard drive is idle. PrimoCache does an amazing job of its handling of defer write data too. Also very important is that whatever changes are made to data in L1 or L2 cache is always updated on your hard drive in this defer write process. This is the definition of deferred write. It defers the writing to the main storage.

We have been using PrimoCache for over 6 years on all PC's in our office and it has proven to function perfectly and is also a perfect example of the perfect implementation of a software solution to a latency problem. PrimoCache does what it does perfectly. You can set up multiple different options for each physical drive with regard to whether you want data on a specific drive to only be L1 or L2 cached, or turn off deferred writing on a particular drive.

It truly is an amazing "piece" of software and is only a $29.95 product and worth absolutely every penny.

You can leverage the flexibility of UltimateDefrag to work together with PrimoCache in 3 ways:

1. To set up a third level of file access performance after L1 and L2.

3. To cache files on the fly, onto your SSD L2 or L1, as they are read and written during the defragmentation process

Remember, UltimateDefrag enables you to place the files you use the most and want the highest performance from to your outer tracks. At these tracks, data transfer rates are around 75% more than average transfer rates for the drive. As well as those faster transfer rates, this high performance files are grouped very close together and therefore file access latency is reduced by a factor of 3. Overall, UltimateDefrag will give you around 400% performance improvement for those files at the outer tracks. If you use PrimoCache, any data that is not yet cached in L1 or L2 and therefore read from the regular hard drive is then read from the High Performance zone at 400% the speed that it otherwise would if its file placement was not optimized. This third level of performance is easily created by UltimateDefrag's High Performance options.

You can now defragment your hard drive at mostly SSD speeds. When you defragment a hard drive with PrimoCache installed, and data is cached, the data is read from and written to the L1 or L2 cache. This vastly increases the speed of defragmentation. Don't worry about data on the SSD mismatching that on your hard drive. It always gets updated on your physical hard drive according to the defer write schedule you have set. We recommend 10 seconds at most. This defer write is not something you can configure with the Windows cache.

When you watch UltimateDefrag's incredibly informative file moving interface in action with cached data, you can see many files get moved almost instantaneously during the moving from and moving two phases for each file.

3. Caching files on the fly as defragmentation proceeds.

Note that during regular defragmentation, the Windows default cache does not cache data. It performs unbuffered (no caching) reads and writes at the lowest level. This can make defragmentation proceed slower than we would like it to. PrimoCache adds this additional benefit to defragmentation in that data is cached as it is written during the move-to phase of the moving of the file. Yes, it gets flushed to the physical hard drive, but it is also cached in PrimoCache's L1 or L2 cache. Therefore, when your defragmentation with UltimateDefrag is complete, most of, if not all of the data moved to the high performance zone is cached in PrimoCache on the fly and ready to be read at maximum performance. No other defragmentation software has a frequently used files performance option that enables it to take advantage of the caching feature of PrimoCache in the way that it does. Any file reading from the regular hard drive is at the next best speed after L2 cache.

These are the only two software titles you need to give yourself the ultimate solution to maximizing your hard drive performance while enjoying the low cost space that regular mechanical hard drives provide.

We have no affiliation with Romex Software, the creators of PrimoCache, but we felt this synergism between the products needed to be brought to light amongst users.

PrimoCache is priced at $29.95 and is available at https://www.romexsoftware.com

UltimateDefrag is priced at $29.95 and is of course available here on our site: https://www.disktrix.com/ultimatedefrag6.html

Below are screenshots from PrimoCache (top) and UltimateDefrag (bottom). Note that this 1 Tb drive has had a 96.6% cache hit rate with 80% of that actually being at lightning RAM speeds. This user pretty much enjoyed RAM speed file access for 80% of the time and SSD speed access for the remaining 20% of the time. Ultimately, this PC user's experience was pretty much instantaneous over 50 Gb of data being read during PC use over several days. Frequently used files were placed during defragmentation with UltimateDefrag before the reboot after which this data was collected.

The UltimateDefrag image was not for this particular 1 Tb drive but it shows the High Performance files (purple) placed on the outer tracks. The software estimates that file layout to provide 368% performance over factory averages, therefore any data not cached by PrimoCache will be read from that hard drive at 368% performance, before it is then cached in PrimoCache for SSD or RAM speed performance. 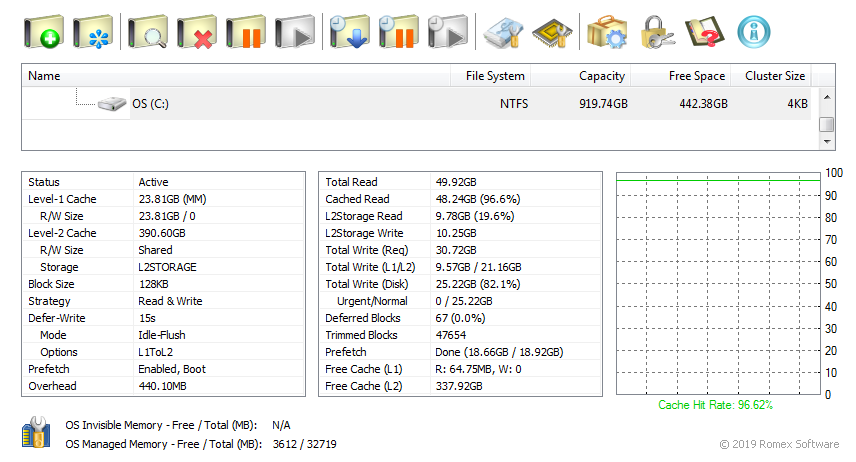 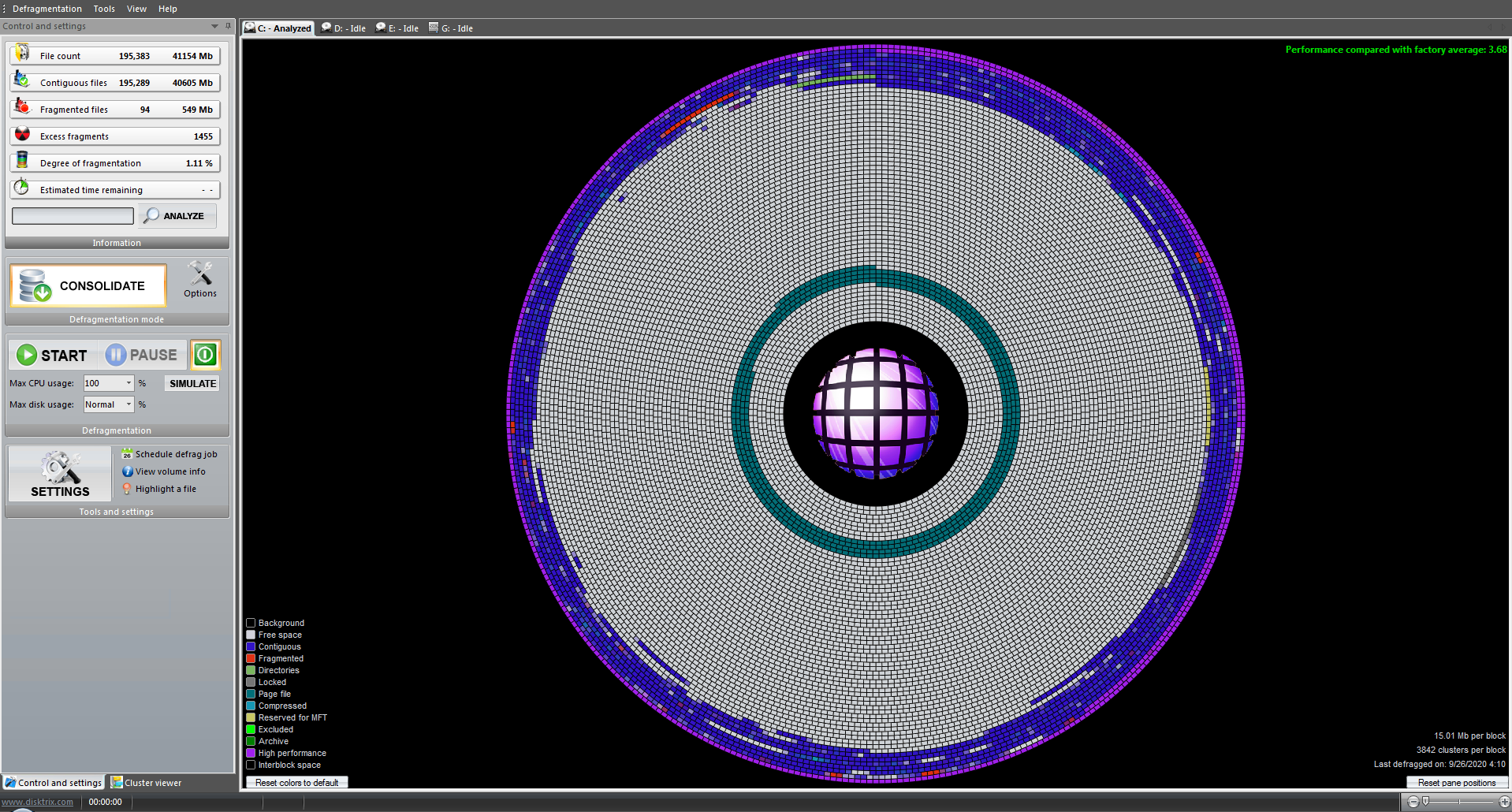 Share
Tweet
Plus
Categories
Can't subscribe you right now. Try later
Thank you for subscribing to the newsletter! We hope you enjoy shopping at DiskTrix Inc